The Bathtub Curve and Your Hard Drive 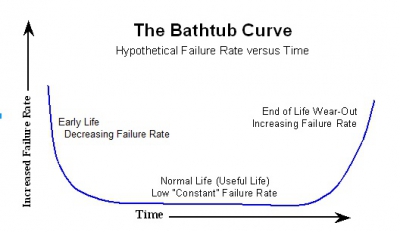 At some point, we’ve all heard of the Bell Curve, which usually has to do with some smarty-pants in your class getting such a high grade that everyone else has to work harder. But did you know, there is a curve for talking about the life of your hard drive?

On one side, we have the beginning of life for a product where the failure rate is high, but decreases at a very rapid rate. Electronics that fail at this point in the ‘life cycle’ are usually caught before they reach consumers - ie, you. These product failures would be caught during the testing phase of manufacturing.

On the other side, we have the end of life, where the failure rate steadily increases. The rise in the rate of failure is not as sharp as failure decreases in the early life stage, but it is a fairly steep rise. This is the time when your drive fails for seemingly no reason. It is literally when your drive is “wearing out”.

While it seems like this is some mystical, hidden reason that you’ll never be able to understand, or perhaps it’s something that is completely out of your control, that’s not necessarily true. Whenever a sector of a disk is damaged, that sector is labeled as a ‘bad sector’ and is ‘mapped out’. This keeps these bad sectors from affecting the drive’s operation, and allows you to continue using the drive as normal. This process is completed by the computer and is done without the user’s awareness. As more and more sectors are mapped as bad, less and less of the disk can be used. Eventually, enough sectors are damaged that normal use cannot continue. It’s easy to see how, over time, it’s inevitable for the disk to ‘wear out’.

More in this category: « 5 More Myths About Data Recovery 5 Ways You Lose Data »

back to top
Data Recoup 4.8 / 5 based on 208 user ratings 960
Copyright © 2021 DataRecoup Recovery Services. All Rights Reserved. Designed by DataRecoup Lab.